Blessed & energized at one the worlds most powerful vortexes in the world, that sits on a crystal plate 270 miles in diameter.

Metaphysically, clear quartz crystals have been prized for their ability to transmit healing energies and to attune the bearer to the higher vibrational frequencies of spiritual realms, which exist beyond the visible spectrum of light.

Clear quartz amplifies the energy of thoughts and emotions, and can be used to facilitate communication with Angelic Realms, with spiritual guides and teachers, and with other sensitive individuals around the world.

Thank you for the incredible beauty of this piece and your amazing customer service! 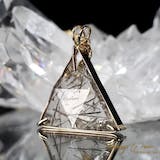