Tanzanite Keys: Linkage of the mind and heart, enhanced spiritual perception, compassionate self expression, adherence to truth.
Tanzanite is a "stone of magic" that helps with spiritual awareness and psychic insight. Tanzanite is also said to transmute negativity. 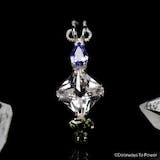