When receiving the right group of synergy 12 stones, one has the capacity to make one feel an ‘Amplification of Self.' Under their influence, one feels more powerful, more present, more awakened, more aware and more alive.

"Although Brookite itself is a rare stone, Brookite within Quartz is much, much rarer.These crystals are some of the most powerful stones for consciousness expansion and higher awareness that I’ve ever encountered! The combination of Brookite and Quartz in the same stones provides an amplification of Brookite’s energies of upper-chakra awakening and alignment, as well as interdimensonal communication with higher beings. It is a powerful aid to inner voyaging to higher dimensions, and engenders the experience of moving beyond the body." —RS

African Gray Herderites are very high-vibration stones, yet their energies are quite smooth and softly elevating.


“Herderite is one of the pre-eminent stones for awakening and charging the upper chakras of the body and fully connecting one’s conscious awareness to the higher dimensions linked to the chakras above the head in the etheric body.
All varieties of Herderite share this trait, and they are incredibly powerful tools for inter dimensional travel, communication with spirit guides and Light beings, and embracing enlightened awareness as a full-time state of being.

“The African Gray Herderites will work even more powerfully if paired with Golden Herderite, and they are also enhanced by White Azeztulite, Phenacite, Petalite, Natrolite and Satyaloka Clear Azeztulite.

Tanzanite
Tanzanite (gem Zoisite or blue/purple Zoisite) is called a "stone of magic" that helps with spiritual awareness and psychic insight. Tanzanite is also said to transmute negativity.
Tanzanite Keys: Linkage of the mind and heart, enhanced spiritual perception, compassionate self expression, adherence to truth.

Danburite Crystal with Record Keepers on back face:

Moldavite Tektite: (stands up on its own)

Moldavite is a rare bottle-green translucent stone of unearthly origins. Scientists postulate that a meteor shower in the Moldau Valley of Czechoslovakia some 15-20 million years ago caused extra-terrestrial material to fuse with earthly rock formations at very high heat, forming fused glass -- the only moldavite known to exist.

Moldavite is known as the "Grail Stone". Legends say that the Holy Grail was formed out of a green stone that fell from Lucifer's crown as he descended from his heavenly abode to Hell, impelled by the force of a blow from the sword of Michael the Archangel. Until recently it was assumed the Grail Stone was emerald, but recently metaphysical rock hounds have suggested that the true Grail Stone is moldavite, a translucent green gemstone that fell from the sky millions of years ago.

"These stones vibrate with high frequency pulsations"
The classic forms of tektites - tear drops, smooth rounded buttons and dumbells suggest these stones were, at the time of associated meteoric impact, heated to the liquid state and flung through the atmosphere. Scientists have long debated whether Tektites were themselves meteorites, terrestrial rocks melted by meteoric impacts, or some fusion of terrestrial and extraterrestrial material. Tektites have a long history of lore and legend. More than 2000 years ago Chinese writer Liu Sun gave Tektites the name Lei-gong-mo, meaning "Inkstone of the Thunder god."

Petalite.
Sometimes called the "Stone of the Angels", Petalite is excellent for spiritual healing. It encourages and promotes connections to angels, spirit guides and totems.

Vibrates to the frequency of ENLIGHTENMENT, and it is more intense then any other stone in the mineral kingdom! These powerful and rare stones are from the Satyaloka area of southern India and have been gathered for you by the monks at the Satya Loka monastery for the purpose of spreading the energy of crystal enlightenment. The monks believe that this energy is a quality of the mountains where they live and that the stones are capable of carrying and dispersing this energy throughout the world.

Satyaloka quartz vibrates with the frequency of pure spiritual White Light and carries one of the most rarefied energies of all the stones in the mineral kingdom. This is a very holy stone, imbued with the energies of one of the Earth's relatively unknown sacred sites - the mountains surrounding the Satya Loka monastery. It has been suggested that this area is the crown chakra of the Earth. Certainly these stones resonate powerfully with the human crown chakra, and they can be of great assistance in building the emerging planetary consciousness.

The frequency of Scolecite connects to the third eye, crown and soul star chakras. It gently opens, cleanses and activates these higher chakras allowing one to connect to the higher dimensions allowing "light"energy to permeate one's energy fields and bring forth a sense of serenity to one's being.

The energy of Scolecite helps one to connect to one's soul to understand one's soul's purpose in this lifetime and learn the true nature of one's being. It helps one to obtain the calmness and stillness of "Inner Peace" that enables one to relax and can bring about peaceful sleep.

Original White Azeztulite (Azozeo Activated)
"Azeztulite is among the highest vibrations in the Mineral Kingdom." Carrying a high vibration from the Angelic upper realms. They expand awareness to higher realms, actualize spiritual capacities and open one to enlightenment.

Keys – Receiving the Nameless Light, Link with the Great Central Sun, Reattunement of the Liquid Crystal Body Matrix for Healing and Regeneration

Chakras - All (including the etheirc chakras above the body)

Received my stones today. Love what you chose for me! Thank you! 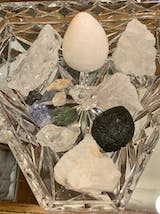 I absolutely love what you chose for me. I’m really looking forward to spending time with their energy. I popped the rose quartz bracelet right into my wrist (thank you❤️)
And the angel is on my table .
Blessings and good health to you during this most intense and interesting time we are all traveling through together❤️

A
Ashley Mai Nguyen
Moving to the highest expression of divine self and I was lead to you!

Hi Shilona. After praying for divine guidance last night as well as meditated (and research) on it, I decided to move forward with your synergy 12 stones set. I’m so glad I found you. Along with the necklaces and bracelets, this is a HUGE investment for me but I feel good. I’ve asked for the best to help me with my spiritual practice moving to the highest expression of divine self and I was lead to you. Thank you for helping me put together the synergy 12 set that is best for me.

I’m so grateful for your generosity and all your words of advice. It’s rare and precious to find another beautiful soul willing to share ❤️

I am so excited to receive the rest.

Have a wonderful weekend Shilona.

Much Love and Light. Ashley

C
Craig P
Hello! I received the package today, and have been spending some time with the stones and

getting acquainted. Thank you so much in attending to this transaction. I am sure we will do business again. Happy Holidays!

I
Ileana
I have received the shipments thanks so much for the gift.