I just read my earlier review on here and I have to say that 'Johny' sounds so foreign to me now. When I ordered this crystal I was living on a yacht in Spain about a year and a half ago. The moment I clicked on the mouse pad to send the money I could feel something shift... 2015 was a restless year for me. I kept on seeing 11:11 everywhere I looked and also saw other numbers repeating itself over and over again. I knew something big was going to happen and so it did!

Shortly after I ordered the crystal, Mata Amritanandamayi, also known as Amma the hugging saint came into my life. She was on a tour through Europe at the time and was going to be in Barcelona. Just so happened to be that I found out about this the same day our yachting season ended and my yacht returned to Barcelona. I went to go see her for the weekend and had darshan with her three times. It was incredible! She gave me the perfect mantra and I started chanting it diligently every day. There lies so much power in these mantras! Not long after this encounter my current guru, Sri Paramahamsa Nithyananda Swamiji, came into my life.

I witnessed a miracle even before I saw him in living flesh and knew I had to go see Him. I manifested the money I needed to attend His 21 day meditation retreat in Thailand called Nithyanandoham 1008. The crazy thing was just one day before I was supposed to fly to Thailand the crystal arrived! Then I flew over there with it and so many things happened! In the end I wanted to gift it to my Guru, but he blessed it instead and gave me the nod to keep it!!! I was literally shivering with it in my hands. Now, if you are not familiar... Paramahamsa Nithyananda is a enlightened Master. He is the only incarnation on the planet, He is Sadashiva!

The crystal I knew already held tremendous power, but for an enlightened Master to touch it and bless it is extraordinary! Not long after my return to Spain I moved on to His ashram in India... (continued nex... 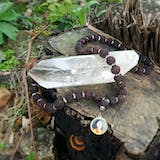 I received the crystal today! Thanks for the gift and nice wrapping. Its sitting next to me here still in the purple wrapping I haven't opened it yet. I want to go sit in the sun when I do.

I felt like a little kid when I got the box, couldn't stop the massive grin on my face and felt like having the giggles. It has an amazing energy and I haven't even opened it yet.