'The Emerald that fell from the sky'

It would have got a 5-Star but it is too spikey to keep on and sleep with, not rounded pieces as in pic, but still my favourite bracelet! 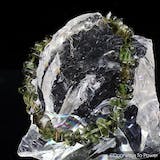