Very Rare Piece. There are 2 left, no more will ever be produced again.

The magician stone pendant cut according to principles of sacred geometry so that a star exhibiting four-fold symmetry appears within it. One can see other stars refracted within the star as well.

Tanzanite is a "stone of magic" that helps with spiritual awareness and psychic insight. Tanzanite is also said to transmute negativity.
Tanzanite Keys: Linkage of the mind and heart, enhanced spiritual perception, compassionate self expression, adherence to truth.

I cherish them so much
I truly believe in your stones
Thank you for your work, time & energy & passion & infusing all of your knowledge & heart ~ blessings on the crystals
I’m on a spiritual journey & exciting one
Thank you for being apart of that
Merry Christmas❣️
I pray that 2020 & this new decade brings
Love peace & well being 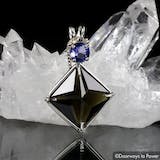 A
Anna
Dear Shilona, my pendant and necklace arrived yesterday.

It is absolutely stunning, and I can’t wait to start bonding with it. Thank you so very much for helping me bring it into my life.
Blessings,
Anna 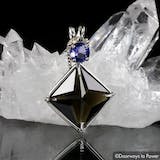