Moldavite Magician Stone Pendant (RARE) Limited Special Edition. The magician stone is cut according to principles of sacred geometry so that a star exhibiting four-fold symmetry appears within it. One can see other stars refracted within the star as well.

Thus it is no surprise that the equilateral cross is an ancient symbol of the Mother Goddess, and represents the four elements of earth, air, fire and water and the four directions of the compass.

Tanzanite Keys:  Linkage of the mind and heart, enhanced spiritual perception, compassionate self expression, adherence to truth.
Tanzanite is a "stone of magic" that helps with spiritual awareness and psychic insight. Tanzanite is also said to transmute negativity.

I love my pendant, it’s as beautiful as I expected. I do wish we had a choice in chains to go with it, though this doesn’t take away the beauty of the crystal.

t's so beautiful and feels so good. It calls me to wear it all the time. I will definitely buy again soon.
Thank you for the additional crystal too. It just so happens that I was looking for one days before this arrived. 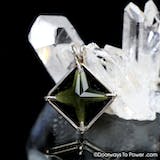 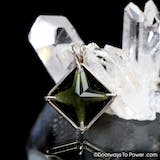 Not only does this stone bring synchronicities and helps me connect to my next point, its a wise stone, and so beautiful and elegant. I always feel very rich when i wear it and it goes well with everything. I normally have on moldavite everyday.

Such a beautiful powerful pendant! Moldavite is my favorite stone and having it formed makes it even more powerful! I have used Vogel inspired items before and this too adds another dimension to it’s healing!