Amethyst embodies the Violet Flame, using its healing power on all levels. Highly useful in meditation and one of the most effective as it calms emotions.

Moldavites are the rarest of gems, perhaps more rare than diamonds, rubies or emeralds. Moldavites have been prized for over 25,000 years, since archaeologists have discovered moldavite shards and pieces in cave dwellings of that era.

I waited a very long time to find the perfect one. And it completely exceeded my expectations. Beautiful, high quality stones, great craftsmanship, and amazing energy! Highly recommended! 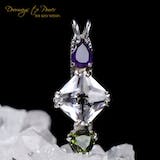