The crystal wand is simply amazing.
As you said it would be worth waiting for.
A truly fantastic gem.

I had the wand out in the sun today totally incredible.
Thank you.
The small crystal gift and bracelet inside is also lovely. 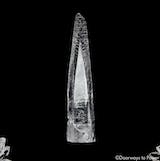