'KEEPER OF THE LIGHT'

The Largest Lemurian Light we have ever come across, this piece is much more clear than the photos indicate and it radiates energy with power!

That I can fill my new home and place of prayer and meditation with these beings of light is a true blessing. Actually my entire life each day is a blessing. You are a integral part of that, Shilona. 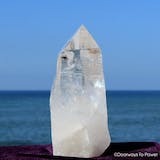