John of God Triangle Quartz Casa Crystal Sculpture 'Ascension' As Above, So Below

Magnificent John of God Crystal Triangle Sculpture with Distinct Sunken Record Keeper on the bottom of its base.

"As above, so below.” It reflects how different levels of existence influence one another, whether those levels be intellectual versus physical, the spiritual world versus the material world, or microcosm versus macrocosm.

"Beyond The Ordinary, Love has Won"

Artisan Polished & Created, One of a Kind Crystal Sculpture & Energetic Gateway, representing the Ascension toward the spiritual world. This John of God Crystal Triangle symbolizes , Feet on the Earth Heart in Heaven. A strong foundation rooted to the ground through its solid base.

When I commissioned this piece, the sacred feminine and masculine energies would be visibly present in the Triangle Crystal by making one side smooth and rounded symbolizing the feminine energy and it's opposite side, much sharper, straight angled symbolizing the masculine, perfectly balancing the Divine Feminine & Masculine.

In the same way, the feminine is waking up to her divine qualities and offering these gifts to the world, so the masculine is awakening to a new (actually old) way of being with the feminine. The awakening masculine supports the feminine aspect in visionary women and men, so they can bring their gifts into the world.

There is Ancient Wisdom, a light that is the breath of the divine energy. This Wisdom is a ray, a brilliance, a mirror, and is the manifestation of the divine energies. It moves everything. it rules over and emanates Nature; it is invisible and a maintaining fire, an inscrutable power of the uncreated interior.

As Within so Without Every natural form is latent within us: originates in the soul whose essence is eternity, whose essence we cannot know but often intimates itself to us as the innate power to love and create. The universe is made of worlds within worlds, each mirroring the other perfectly. Locating the master key or principle of iteration reveals man’s own mysterious world to himself and simultaneously unlocks a glimpse of the pattern of the universe. “All is within yourself, know your most inward self, and look for what it corresponds with in nature.”

There is much more to this unique & special piece. It is You, Who Show The Way.

||| Master Record Keeper ||| THE RAISED RECORD KEEPER crystal is by far the most common form found today. It is recognized by raised triangles that appear on the main facets of the stone's termination, pointing 'upward' toward the apex of the termination. While these triangles may appear or 'pop' suddenly they are just as likely to be already visible when one first receives the stone. Raised Record Keepers activate cellular memory and assist in retrieving information from one's lineage or past lives. These stones tend not to be preprogrammed with information; rather they work as a key to unlock what is recorded within one's own cellular structure. Each triangle appears as a trigger to activate a specific chain link on the Dna . When working with these stones, it is not unusual for triangles to rise and disappear as aspects of one's cellular memory are cleared and integrated and new aspects are activated.

The SUNKEN RECORD KEEPER is indicated by an upward -pointing triangle that appears to be cut into the stone and recedes into the surface of the crystal. These are similar to 'keyholes' in the surface of the facet but distinctly triangular in shape. The sunken record keeper is a 'true' record keeper and they are much rarer than the raised record keeper crystals. while the the raised record keeper crystal activates cellular memory so information can be retrieved from one's own internal data banks, the sunken record keepers contains a data bank of information in the stone itself. Usually, this information was recorded during the lifetimes of ancient civilizations and the Star Seed nations has also been recovered. Generally, only the soul who originally programmed the crystal will be able to fully access its information, though the triangle may be visible and the crystal usable by others.

Doorways to Power, offering the most beautiful, high energy, individually selected A ++ quality John of God Quartz Crystals and Jewelry pieces in the world!

Thank you for your service in this world. Thank you for sharing your being with me.
Do let me know if you have an other beauties coming in that I might be interested in. 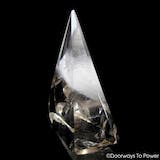 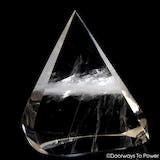