This beautiful pendant has been powerfully blessed & energized at one the worlds most powerful vortexes in the world, that sits on a crystal plate 270 miles in diameter.

The magician stone Pendant is cut according to principles of sacred geometry so that a star exhibiting four-fold symmetry appears within it. One can see other stars refracted within the star as well. The equilateral cross symbolizes the Tetrahedron.

The Tetrahedron, or four-sided pyramid, is the geometrical principle underlying many types of both organic and inorganic molecules, and provides the microscopic structure of diamonds and of the amino acids that are the building blocks of all life-forms on planet Earth. Thus it is no surprise that the equilateral cross is an ancient symbol of the Mother Goddess, and represents the four elements of earth, air, fire and water and the four directions of the compass.

This necklace has raised my vibration/frequency and brought me miracles!

S
Sofia
I am so happy!

I LOVE this necklace. I felt so happy and energized just wearing it. Thank u so much!

K
K.K.
Dear Shilona, Just want to thank you for the beautiful jewellery.

The ring fits me perfectly!!! It must have been meant to be . Thank you so much. The energy of the crystals is incredible.
Warm wishes, Helena 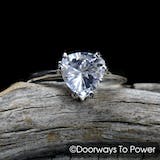 K
Karen Herrell
Omgoodness! This is amazing. I love this!

Thank you for the smooth and timely transaction. 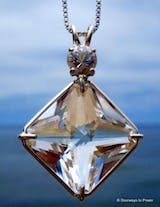