The Temple Heart Crystal (Master Dow) is a fairly rare formation of Quartz. When one of these jewels does appear it is a sign of impending transformation and a quantum leap in consciousness in compassion. It has one of the highest frequencies of any clear quartz configuration - an energy frequency that is particularly important in these times.

Your Phantom is this: at some point several million years ago the crystal grew to a certain height and shape and then its nutritional source was shut off. Then at some later time, new solution flowed in and the crystal began to grow again, but totally within the boundaries of its original framework, rather than taking new forms or directions. In other words, the crystal grew beyond its original plan or expectations due to new incoming nutrients that provided the opportunity for continued growth and expansion within its original form. Focusing on a Phantom Crystal can remind you that you are always well protected during these times of new growth. Just be patient and trust that your own additional nutrition will show up right on schedule exactly when you need it, in the quantities you need it or can assimilate.

John John of God Crystals are imbued with the healing light and compassionate energy of the entities of Casa Dom Ignacio, Abadiania, Brazil. For over 30 years, Medium Joao ("John of God") has been channeling these entities of light, love, compassion, and peace, bringing miraculous healings to millions of visitors. The Crystals are originally sourced from mines mostly in Goias, central Brazil, not far from the Casa.

Each week the Casa receives deliveries of water, and crystals of different kinds. Once at the Casa, the water and crystals are programmed by the entities of the Casa Dom Ignacio, specifically to benefit the healing of all people touched by the Casa energy.

A ray of light is a metaphor for divine energy. Crystals play with light, direct it, concentrate it and magnify it. That is why a gem sparkles when you hold it in your hand. Now, imagine that the sparkle you see when you hold Casa Crystals in your hand, or on your body is not the sparkle of light, but instead it is divine healing energy entering your body. As the energy enters your body it re tunes the energies that are there, returning them to the vibration of peace and harmony that you are when your spirit is not in a body. Your body is an imperfect container created by you and for you as a learning tool.

The healing that you receive from the entities of the Casa through these crystals is part of that lesson. The healing will remind you, both consciously and unconsciously of what you willingly forgot when you chose to accept the Adventure of Earth.

For many years medium Joao has worked in this service in a small town in central Brazil. And now the time has arrived for his work to be more available to people around the world. He is a medium of extraordinary ability yet we are all mediums and capable of miraculous things.

Working with the entities of the Casa will help you to find healing and in so doing, to expand your natural gifts, your mediumship, and your abilities to heal others.

Rainbows will appear as internal fractures (foils) Rainbows are the closest manifestations of Pure White Light that can be witnessed on this plane.

Rainbows unite and integrates heaven and earth. On special Occasions rainbows choose to live within the the world of a crystal, displaying their magic to us. Truly a gift from the Universe if you are Blessed to receive one of these. When used in Meditation Rainbow crystals open the doorway way to the realm of pure color. Back to the source of all life, the Great Central Sun, the foundation of our reality. They are also know to be bringers of happiness and master depression fighters.

and have been working with them metaphysically for several decades. There is so much to explore, to discover, and to feel. I only recently discovered your shop and was delighted; the energy is very different from other shops I’ve visited - i feel mesmerized by beauty.

I’ve been to several sacred sites in the areas you mentioned (I used to teach in Libya) and was utterly enchanted. We used to travel regularly to the “ruins" in Libya to swim. They were deserted, since there was no tourism, and the energy was lovely. 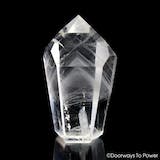