Ametrine energies are said to stimulate the intellect and rid the aura of negative energy. It is also said to be helpful for releasing negative emotional programming. Ametrine is reputed to mystically aid in meditation, boost psychic abilities, relieve tension, disperse negativity and help to eliminate prejudice. It also has the basic metaphysical and healing properties of both Citrine and Amethyst.

* Blessed and energized by the entities of Light who work with and through John of God.

and it was beautifully wrapped and packaged. I can’t wait to get to work with this amazing crystal. 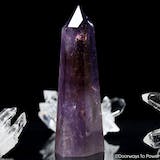