I am already wearing :-) Just as pictured-beautiful and clear! Quick shipping and Doorways to Power quick to respond and great to deal with! 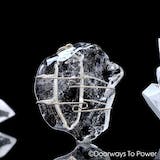