5/28/20 This past week I spent 5 days in nature on a sacred mountain along the border of Mexico and California, called to go do specific 5D work, and I brought a couple of power pieces with me as part of this work. This is one of them, it glows and is an advanced piece of crystal technology... You will know if this piece belongs to you. I am releasing it 7/23/20.

and every crystal from you I cherish! AMAZING LIGHT and ENERGY from Andaras to Golden Harmonics!!! It does not matter if I am over the pond, bought today, delivered perfectly packaged almost instantly to my door! With Love and Gratitude from CH,
Olga 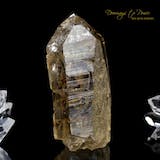