A crystal with an Eight sided face is called a Grounding crystal. They are quite rare and not easily available. Grounding crystals help you deal with practical matters in a logical and clear-headed way, attuning you to Earth energies and preventing your thoughts from becoming “scattered“

These beautiful crystals are powerful for meditation, channeling, healing or any other work you are called to do with these. They will connect with you and share their awakened memories and ancient, sacred wisdom through their illuminating beauty and light

Once again, as I attune with my Multidimensional Aspects, Shilona & the Doorways to Power Team have provide the perfect spiritual tool at just the right time. Originally, I purchased this smaller scale Lemurian Grounding Healer for travel use, while on the road. As fate would have it, I have been grounded at home with the current energetics. As it turned out, this is exactly where I was supposed to be & this Crystal has helped me integrate healing of some of my own personal shadow aspects for healing, that I thought I had already overcome. Anyone looking at the World around can see this very scenario continuing to play out for healing as well. Finding the balance by discerning the blending of energetics needed in each moment is important & wise. Many today are headed on a path to face some of their deepest shadows, as well, with some rooted in egoic pride, shame, regret, etc.. Some even perhaps on the other hand, ‘blinded by the light‘ in avoidance, of facing the fact that they might also have such issues not authentically healed. Like a thorn that has healed over, only to later to abscess & needing to be drawn out with a drawing salve...

This little Lemurian proved to facilitate this process for me like the Little Mouse who assisted the Lion to draw thorn from the Lions Paw. Perfect in entering the Current Energetics of the Lions Gate Portal, all while Sirian energetics provided me some levity, when picturing the Little Mouse helping the Mighty Lion. Harmony comes from balance & discerning of what energetics are applicable in order to allow you guidance in the form of a ‘Gentle Guiding Hand’ as opposed to the ‘Universe crashing Down upon You.’ Sometimes, a little ego is called for, as long as pride doesn’t keep you from getting stuck. The same I find at times can be true for staying out in the Sun too long, like getting sunburnt or even blinded. I like to think of “Grace” as the ability to go from one to the other, Without getting stuck, thus allowing for discernment of what’s needed in each moment for the best outcome for all. It’s a “Heal Thyself” first authentically, in order to be able help others, scenario. After all, who would want to have a healer or doctor work on them, without first discerning that said healer or doctor, was in an authentic state of grounded well being beforehand. Be the change you want to see, but always know where you are in your surroundings & what kind of energetics your blending with either intentionally or unintentionally. The word discernment is a paradox in itself. Look up the definition & you will see. Lift the Veil, the unbalanced in the World around us today might actually be related to not being able to have true heartfelt resonance expressed by not having compassion to see both side of the coin. The Alpha & Omega. Male & Female. Day & Night. Ask yourself what would one be like without the other.
Be a Peaceful Warrior who learned of True Strength by not letting pride stand in the way. 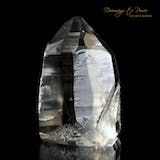