When cut into gems, Golden Labradorite can exhibit an uncommon brilliance and when paired with Moldavite, you have an absolutely stunning high energy pendant combination.

Thus it is no surprise that the equilateral cross is an ancient symbol of the Mother Goddess, and represents the four elements of earth, air, fire and water and the four directions of the compass.

Golden Labradorite is one of the best stones for working with the third chakra. It represents the solar qualities of Labradortite-inner strength, vitality, courage, clear thinking, endurance, mental activity, spiritual focus and purposefulness. It can calm the emotions through increased clarity of mind, and can help one see the Divine pattern in ones daily struggles. In dream work, it can assist one in consciously awakening in the higher planes and in bribing back the important.

Golden Labradortite takes one not only into communion with the energies of our own sun, but through a thread of light it also connects with the Great Central Sun, the home and origin of consciousness in the Universe.This is Golden Labradorties greatest gift. The Great Central Sun is the spiritual center of the Universe, existing in the etheric realm.

It is constantly surrounded by the multitudes of orbiting angels, and it is from this domain that the "music of the spheres" emanates. In meditation, one can follow the golden thread of golden labradortites energy into this realm, and if the journey is completed one will never forget it. It will permanently infuse one's consciousness with awe, reverence and gratitude, and a sense of the magnificent perfections of ALL-THAT-IS.

it felt like it linked up with me the moment I put it on and it was really empowering, inspiring, and warm. It’s so beautiful, too, of course. Much prettier in person. I really appreciate the way the seller operates, from the great shipping to the extra crystal gift, which I include in my pouch that I carry with me everywhere.

I’ll definitely be back. I have my eye on the moldavite, phenacite, and danburite magicians stone down the line Thank you so much for a great shopping experience and a truly beautiful, high vibrational piece. Love love love it! 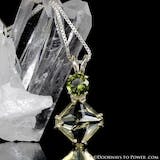 J
Jody Butler
I am delighted with my pendant! I previously purchased your angel aura flower of life pendant

and have worn it nearly every day. I can already tell I'll be having a difficult time deciding which to wear! The golden labradorite just sparkles with light and color. Gorgeous! The combination with the moldavite green is gorgeous. This jewelry isn't cheap, but it is of such high quality that I believe it is more than worth the price. I'm sure I'll be back again!