5/28/20 This past week I spent 5 days in nature on a sacred mountain along the border of Mexico and California, called to go do specific 5D work, and I brought a couple of power pieces with me as part of this work. This is one of them, it glows and is an advanced piece of crystal technology... You will know if this piece belongs to you. I am releasing it 7/18/20.

Rare find! A true gift for the crystal collector and custodian.

Working with doorways to power for every step of the purchase, shipment and receipt was professional and comfortable.

Questions poised during purchase were responded to and the piece arrived in good order and time.

Doorways has such a wonderful and unique collection of crystals to choose from.

Be invited to open the door! 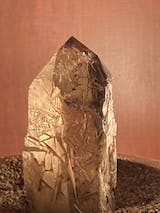