The Temple heart Crystal has three seven sided faces that alternate with three triangular faces, all reaching a perfect termination. The crystal is known not only for its beautiful geometries and symmetry but also for its powerful heart -activation properties. The temple Heart Crystal is a fairly rare formation of Quartz. When one of these jewels does appear it is a sign of impending transformation and a quantum leap in consciousness in compassion. It has one of the highest frequencies of any clear quartz configuration - an energy frequency that is particularly important in these times. It stimulates the heart chakra, and assists one in resonating with Divine Love Energy.

Such a special piece!!! I’m blown away by the energy from this crystal being. I can’t wait to work with it! Thank you Shilona for all the beautiful and powerful crystals you share with us. 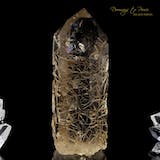