Are crystals who share a common base but who have two separate and distinct points (terminations). They are literally two heads on one body.

The word tantra itself is an ancient Sanskrit word meaning union. Your most important union is always first with your True Self. The ultimate union is when your Soul becomes one with you Original Source, whether that be Life Force, All That Is, or God.

Tantric Twins single-mindedly work to assist you with human relationships of any kind. They prepare you to allow your twin essence or soulmate into your life at a very high energy level. Tantric Twins are extremely effective while working with the bond of two individuals who are already intimately connected. a Tantric Twin is a terrific choices for two people who are already deeply unified and wish to explore and strengthen the bond further, taking the relationship beyond this experience.

It has been said, the Tantric Twin helps one see through the illusions of Time and Space and begin their process of understanding the non-spatial concepts of Nirvana, a place of awareness totally devoid of content, the place of Non-Being 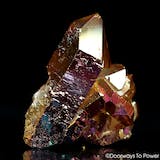