An Inner Child is a smaller, fully formed crystal that is half in and half out of the main crystal. This type of crystal will assist in communications, teaching, and a clear understanding between self and another. These crystals allow the holder to balance between the inner world and outer, receiving information from one (inner) and sharing it with the other (outer). It also reminds me of our sweet, innocent, Inner child, wrapped closely within the arms of the mother (main crystal) while peeking its head out to face a particular issue and being able to heal that issue in a safe emotional environment. 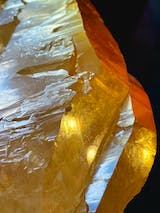