They were wonderful! I put the Rose Quartz angel and heart shaped labradorite on my alter. They are beautiful! The bracelet was beautiful also! Is that aquamarine? Or possibly Larimar or Azumar? I am a stone lover! Those were great gifts!!! Thank you so very much!!! 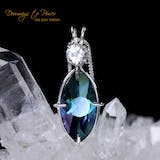