Citirne & Smoky Phantom Quartz Isis Crystal Point has been powerfully blessed & energized by the entities of light whom work through the casa in Brazil, one the worlds most powerful vortexes in the world, that sits on a crystal plate 270 miles in diameter.

These were a new find, very rare and an incredible mix of Citrine & Smokey Quartz Casa Crystals, many with Phantoms inside. We were energetically moved by these and bought every piece that was available. We were blown away by these pieces we are releasing, they are very special.

The Manifest Spirit Crystal displays a five-sided face on front of the crystal termination representing the five elements of Earth. Fire, Water, Wind and Storm. The number five also represents the expression of Spirit energy through form and has been traditionally linked to the Goddess archetype. The Sacred pentagon formed by those 5 sides stimulates one's connection to the Divine Source.

Citrine heightens self discipline and will, attracting professional Success and Wealth. It has been called the merchant's stone and can be placed in the far-left corner, or wealth corner of the office or home, to Attract Abundance.

Highly protective Citrine does not absorb negative energy and therefore never needs to be cleared, making it a great tool for transmuting negative energy.

The Chinese culture used smoky quartz to stimulate the meridians, and India yogis to raise kundalini. The Romans saw smoky quartz as a mourning stone, allowing those who carried it to overcome their grief. A grounding stone. It is used most often to overcome depression, nightmares and stress. Quartz stimulates the natural crystal in body tissues and fluids to resonate at the highest healing frequency.

The clearest smoky quartz are the most intense, powerfully opening the Crown Chakra emanating light down to the Root Chakra, therefore, inducing Alpha/deep meditation. Because of this situation, its benefits also include channeling higher guidance, deep relaxation and helping with unconditional love. Heightens your understanding of nature and concerns for the environment. Smoky Quartz helps store information well for easier recall.It is the perfect stone for grounding the Etheric Layer of the Aura. Of all the grounding stones, it establishes the most gentle and loving connection with the body.

your Phantom is this: at some point several million years ago the crystal grew to a certain height and shape and then its nutritional source was shut off. Then at some later time, new solution flowed in and the crystal began to grow again, but totally within the boundaries of its original framework, rather than taking new forms or directions.

I took a while to write this review because I have never encountered something so unique. This stone is so beautiful. People stop what they’re doing to come take a look. Even in darkness, you can still see the rainbows inside. When the sun hits it, beautiful beams of light and rainbows echo out all around it. The energy is so spectacular and amazing and deeply healing. I have taken it quite a few places around the world and people seem drawn to it. In addition to it being such amazing energy, it is also deeply grounding. This has become one of my favorite stones and I couldn’t be more happy with the shipping speed and presentation it was packaged as when it arrived. Thank you so much Shilona! 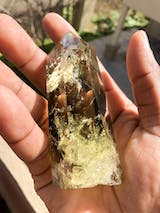 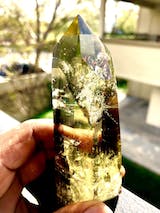