I have had this Cintamani for some time and treasure it. Was carrying it around with me. I then misplaced. It took me awhile searching the house. When I finally recovered it today, I guess I saw it from a different perpective. I now see 2 faces in it, one human and one animal when the light is shining through. Both photos from the same angle. Also just feel calm and joy and a surge of energy now that I have it with me again. 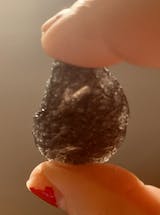