Reserved do not purchase!

Cinnazez™ is a quickener of consciousness and an awakener of higher awareness. It can stimulate the nervous system to actualize one's latent capacities of clairvoyance, telepathic communication, attunement to heavenly realms and direct knowledge of Divine truth. It is a stone of inner alchemy -- a quickener of evolutionary growth, a bringer of prosperity, a link to the angelic realm and to heart intelligence.

The Cinnazez Altar Stones are extremely rare at this time, these are not available anywhere in this size and quality. These pieces have been Artisan polished.

Cinnazez™ is a gemstone blend of Azeztulite Quartz and silicated Cinnabar. It is found on the South Island of New Zealand.

Thank you @doorwaystopower for your willingness to reserve such a precious crystal.
I’m excited to elevate my consciousness with this huge Cinnazez Azeztulite quickly. 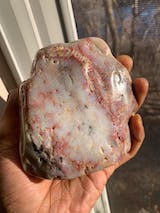