This is the most powerful combination we have yet discovered for facilitating vibrational ascension to higher levels of awareness and a more awakened Light Body. -RS

Satyaloka Crystals are powerful and rare stones are from the Satyaloka area of southern India and have been gathered for you by the monks at the Satya Loka monastery for the purpose of spreading the energy of crystal enlightenment.

Danburite - The metaphysical community prizes Danburite for its ability to connect the bearer to sources directly to sources of Higher Wisdom and to vast libraries of information located in the "akashic records". "Akasha," in Sanskrit, means brilliant, & shining & luminous.

"Carries the high vibrational energy of the Great Central Sun. It raises the vibrations of all of the chakras allowing pure "light" energy to flow throughout one's being"

Nirvana Quartz Crystals resonate at the intersection of past and future time. They have apparently existed in quiet isolation beneath glacial ice for many thousand years, almost as if waiting for this moment to appear in the human world. Though they carry a current of the deep, silent past, their mission is to attune us to not yet formed potential of what can be.

The spiritual beings which express as these complex , almost unearthly crystals, are available to aid us in the evolutionary transmutation which is our highest destiny. The word Nirvana connotes enlightenment, which both reveals and obscures what these crystals offer. They can be conduits for currents of profound inner illumination, yet this awakening, unlike Nirvana as it has been is not an ascension out of the world. It is the incarnation of enlightenment here and now, in our earth bodies.

Petalite: Sometimes called the "Stone of the Angels", Petalite is excellent for spiritual healing. It encourages and promotes connections to angels, spirit guides and totems.

It will be cherished! 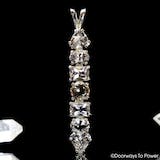