"The Ascension Pendulum lifts consciousness to the highest levels."

Azozeo is an ancient word, discovered in the 2000-year-old Book of Ieou. It was used to call upon powerful angelic beings (believed to be the same angels, the Azez, who awakened the energies of Azeztulite) for the purpose of spiritual ascension.

This word was used (in combination with an Azeztulite labyrinth and pyramid, plus two large powerful Phenacite Crystals), to stimulate certain crystals to a higher level of energy and power. This is why we named the newly activated stones Azozeo Crystals. Only stones exposed to this powerful energy field can be designated by the name Azozeo Crystals.

Collections: Brookite, Phenacite The highest vibration of any mineral currently found on the Planet., Power Pendulums, Search All by Newly Listed

"WOW" is exactly what I said when I saw my pendulum. I felt the energy from it and immediately knew it was something sacred and called me to it. The quality if the stones and the chain very very good and looks like "time" was really spent on it which is (if not) top 3 of my "importance. 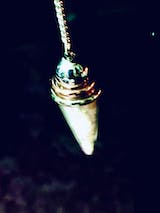