It is always with me and one of the most powerful pieces I’ve ever had the privilege of working with. Soft but powerful! 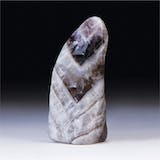