Clear quartz crystals have been prized for their ability to transmit healing energies and to attune the bearer to the higher vibrational frequencies of spiritual realms, which exist beyond the visible spectrum of light

I can't say enough good things about the quality of my moldavite jewelry and the care that was taken in wrapping/packaging. Even the care taken that the package arrive securely, not left at my door! I immediately ordered more. I will give this company all my jewelry purchases. Thank you for having a positive, honest, high standard of excellence in your business! 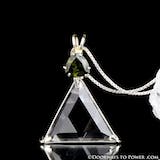 Love my pendant! Opened the package yesterday and don't want to take it off :-) it is beautiful! 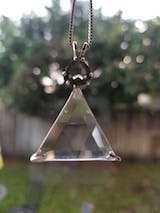 Packaging absolutely beautiful. So excited to unwrap only to find a magnificent cut crystal with Star of David and moldavite stone Can not describe how beautiful this is and has such positive energy. Highly recommend anything from Dootways to Power. You will not be disappointed

I'm beyond thrilled to have received my beautiful pendant necklace. And it was shipped within hours of placing my order. It got here at least 5 business days before I expected it. The pendant is beautifully crafted. I haven't taken it off!