"The Emerald that fell from the sky" 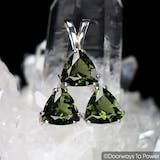